Touch screen (touch screens or touch) are devices that allow the user to interact with a computer by touching the screen. An output device (screen) and an input device (the system that detects contact with the screen itself, getting the position) at the same time.
Touch screen is an alternative to the use of other pointing devices such as a mouse or touchpad.

Most models use a sheet of transparent plastic, thin, durable and adheres to the surface of the screen. The area of the screen "touched" is calculated based on the capacity for the X and Y axes, which varies according to the point where contact occurs. 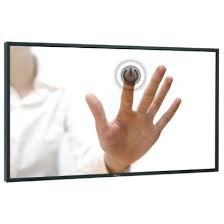 The touchscreen technology is widely used on high-end mobile phones (smartphones and PDAs) to GPS receivers, but also on ATMs and cash registers.
The Multi-Touch unlike the touch screen to collect a single point on the screen allow you to detect multiple touches at the same time and then allow a series of operations moving, magnification etc.

It is possible to transform into  Multi-Touch or touchscreen any LCD and plasma TVs, with special frames that are in our section on types of installation of interactive displays.

Our interactive window is ready for both single and multi touch device.

Adding an existing project to GitHub using the command line

Check Also
Close
About me

This website uses cookies to improve your experience while you navigate through the website. Out of these, the cookies that are categorized as necessary are stored on your browser as they are essential for the working of basic functionalities of the website. We also use third-party cookies that help us analyze and understand how you use this website. These cookies will be stored in your browser only with your consent. You also have the option to opt-out of these cookies. But opting out of some of these cookies may affect your browsing experience.
Necessary Always Enabled
Necessary cookies are absolutely essential for the website to function properly. This category only includes cookies that ensures basic functionalities and security features of the website. These cookies do not store any personal information.
Non-necessary
Any cookies that may not be particularly necessary for the website to function and is used specifically to collect user personal data via analytics, ads, other embedded contents are termed as non-necessary cookies. It is mandatory to procure user consent prior to running these cookies on your website.
SAVE & ACCEPT
Close